In 2012,  Julio and Ivan finished 4th Place in the NATION out of 221 horses for the USDF Horse of the Year Awards at Intermediare 1 level with an average score of 71.25% !!   They also claimed the Champion title for the USDF All Breeds Awards for Intermediare 1 in the USA.   At the CDI*3 Event - Dressage at Devon Julio and Ivan finished in 7th place at I-1 out of 36 competitiors with a 67% and in 6th place in the I-1 Freestyle.   At the Region 1 GAIG Championships, Ivan and Julio became the Reserve Champion at Intermediare 1 Level. 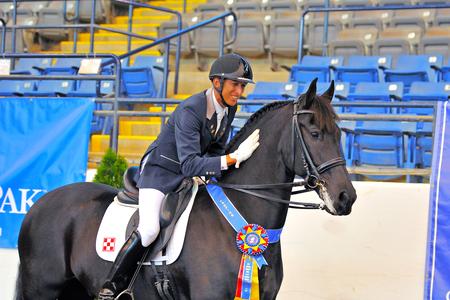 In 2018, Julio and Chardonnay traveled down to Wellington to try and qualify for the 2018 World Equestrian Games.  They earned a qualifying score in Wellington and then came home to Tryon NC to earn the 2nd and final qualifying score!!   Fall of 2018 Chardonnay and Julio will not only be competing at the 2018 World Equestrian Games but doing it in their hometown!! 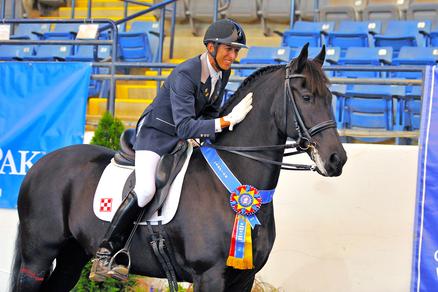 In 2017 Julio traveled to Bogota Colombia with Chardonnay to compete at the Bolivarian Games - where other central and south american countries compete.   Chardonnay and Julio won all 3 Gold Medals up for grabs!  They won the Individual Medal, Team Medal, and Overall Medal with all 3 scores into the 70's !

Julio was interviewed in 2009 by Horseman Magazine.  To read the article go to:

Julio is an experienced dressage trainer that can help you and your horse achieve your training and competition goals.  Julio emphasizes on training correctly from the beginning in order to achieve true harmony between the horse and rider. His students have enjoyed success at all levels of showing.  Here with Mendoza Dressage we offer a very positive, safe and upbeat atmosphere for every horse and rider. Where we strive to treat and give horses the absolute BEST!!

In 2010 Julio earned his USDF Silver Medal and also qualified for Dressage at Devon with two horses for the performance division.   In 2011 Julio earned his USDF Bronze Medal and qualified for the 2011 Pan American Games held in Guadalajara, Mexico on the 9 year old Friesian Stallion - Ivan.  Ivan was the first Friesian to ever compete at a Pan American Games and to date is still the only one ever to do so.

In 2019 Julio partnered up with Aileen Daly and her Danish Warmblood mare Rosali.    Julio campaigned her in 2020 at the Grand Prix Level with scores up to 80% !!   2020 was a very good year for furthering Julio's education - He was able to train virtually with his coach and mentor David Hunt of England 2-5 times per week during the entire year.

​They also competed in several CDI competitions and earned the scores needed to Qualify for the 2021 Olympics !!

Growing up in South America Julio rode horses and taught students on his Fathers farm in the beautiful valley of Tumbaco, Ecuador.   Julio trained up to Grand Prix Dressage with several horses and competed in the International Cup held in South America 5 years in a row always placing in the top 5.  In 2007 Julio relocated to the United States with his wife Jessica and currently reside in the Foothills of North Carolina with their 3 children.

In 2015,  Julio and Chardonnay qualified for the Pan American Games in Toronto Canada, where they finished 17th individually with a 69.8%

Julio and the Friesian Gelding Roelof van Wolfshol were the Region 1 Champions at both 3rd Level and 3rd Level Freestyle!!

At Dressage at Devon - Julio was awarded with the John "JP" Perry Memorial Perpetual Trophy - That is awarded to the person who demonstrates sportsmanship and is a true ambassador for Equestrian Sports! 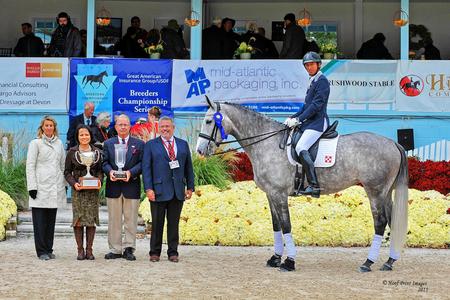